Comments to the book "Learn You Some Erlang For Great Good" by Fred Hébert, Chapter 3 - Syntax in Functions. Pattern matching is much easier to achieve in Erlang than in many other languages, but the syntax takes some time to get used to. Instead of if-else or similar conditional branching, in Erlang you simply use functional declarations with a pattern. Learning goals: Being able to create pattern matching, retaining unbound vs unbound variables, and how to work with guards. Challenges: Differences between unbound vs unbound variables. Fully understanding how to work with guards. 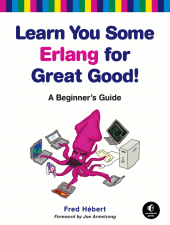 This article series has come about as a result of my efforts to learn Erlang. In order to learn the language, I am reading the book "Learn You Some Erlang For Great Good" by Fred Hébert. Every time I come across something that I find difficult to understand I will make an effort to understand it and explain my understanding in detail. I will also - as far as possible - site alternative sources, possible exercises and more. First off, maybe you could be a pal and buy Fred Herbert's book. There is a huge effort behind that book and I think Fred deserves our support. You can get it at No Starch Press.

I must admit that I am cheating a bit because I read ahead quite a few chapters before rereading an earlier chapter and then commenting on that chapter on this site. This is to discover what is important to remember and / or easy to forget as I dig deeper into the content.

Each article has a list of references that I stongly suggest you have a look at, including the Erlang Language Reference, the ETS reference and Joe Armostrong's book Programming Erlang.

Pattern matching is much easier to achieve in Erlang than in many other languages, but the syntax takes some time to get used to. Instead of if-else or similar conditional branching, in Erlang you simply use functional declarations with a pattern.

A functional declaration consists of functional clauses separated by semicolons and it is ended by a period.

The pattern in the expression can be used for more than just conditional branching. It can be used to find stuff, for instance in a list:

Listing 1: Functions for finding head and second in a list.

Let's see it in practice. If we create a list containing atoms, [dolphins, krikkiters, oglaroonians, poghrils], the first expression should give us dolphins and the second krikkiters. We create a module finding_stuff and include the functions above:

Listing 2: Module with functions for finding head and second in a list.

Compiling and running the code: 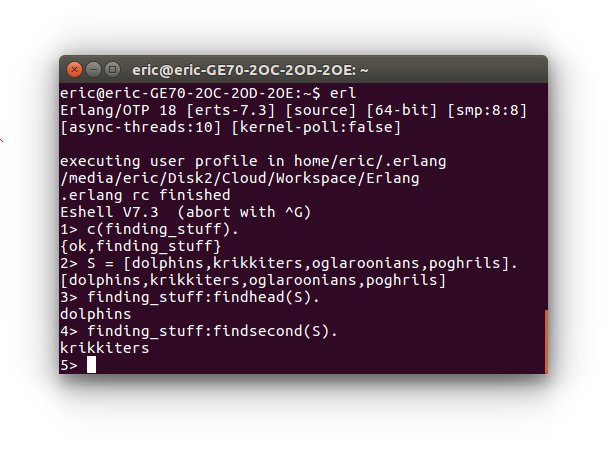 If we want to compare two elements, we can use the following module:

Listing 3: Module with functions for comparison.

Running the code gives us: 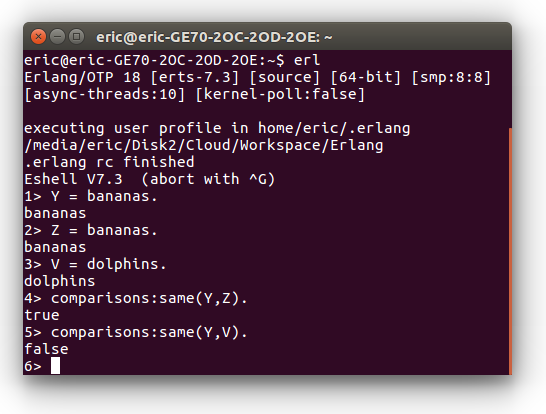 It is not easy to see what is going on here. How does the expression same(X,X) really work? To understand that, we need to have a look at bound and unbound variables in Erlang.

In the expression same(X,X), Erlang treats the second variable as already bound. Since both are named X, it compares the first unbound variable to the second bound variable, and will only return true when both are equal, because X cannot change value. Only if the "new" value is equal to the old one will there be a match, and the function returns true. If not, it passes on to the next pattern match, which is a catch-all, and returns false.

There are limits to what you can do with pattern matching. Patterns aren't good at expressing ranges of values or types of data. This can be done with guards. A guard is simply an addition to the pattern matching, a boolean function placed after the key word, "when" and before the arrow, "->".

Calling time_left(X) with X less than 3 will give the response "So long and thanks for all the fish". You can also add statements to the guard with comma (,), semicolon (;), andalso and orelse. For instance:

What are the differences between the operators?

Erldocs - An alternative to the official sites.

Rebar3 - A build tool for Erlang that makes it easy to compile and test Erlang applications and releases.

Erlang on Freenode - Use #Erlang

"Learn You Some Erlang For Great Good", by Fred Hebert

The Zen of Erlang, by Fred Hebert. A partly practical, partly philosophical take on Erlang.

Getting started with Erlang using IntelliJ IDEA (including Rebar3).

Statistics & R - a blog about - you guessed it - statistics and the R programming language.
R-blog